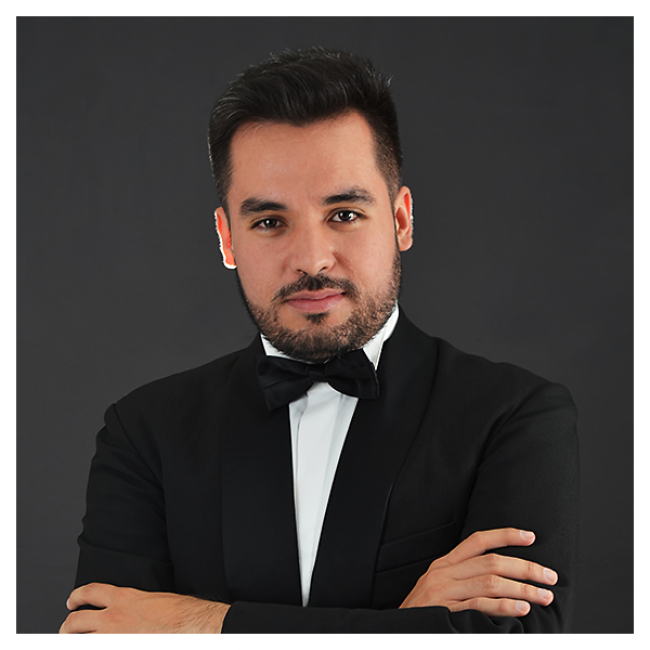 Andres Agudelo is a 27 years old tenor from Colombia, he is currently a member of the Bayerische Staatsoper Opernstudio in Munich, he did his music and singing studies first in Colombia at the Universidad Central in Bogota then moved to Paris to be one of the members of “La Maîtrise Notre-Dame de Paris” after that he was also member of the singing department at Conservatoire Supérieur de Musique de Paris and at the Queen Sophia School of Music in Madrid. In 2017 he was chosen by Conductor David Stern to make part of his Opera Studio (Opera Fuoco) in Paris.

He has sung Gaston/LA TRAVIATA with Medellin Philharmonic orchestra, Il signor Fagotto (Bacolo) with the Universidad Central Opera Studio in Bogotá, Borsa/RIGOLETTO with the Teatro Mayor Julio Mario Santodomingo and Opernhaus Zurich in Bogotá as well as with the Bayerische Staatoper in Munich, Schmidt/WERTHER with the Opera de Colombia, Almaviva/IL BARBIERE DI SIVIGLIA with Opera Quanta Colombia, Tony/WEST SIDE STORY with Opera Fuoco in Paris, Haushofmeister/DER ROSENKAVALIER with Opera de Colombia, Duca/RIGOLETTO at the Verbier Festival in Switzerland 2018,Don Ottavio/DON GIOVANNI at Teatro della Pergola in Florence-Italy, live recording by Warner Classics Italy, Pong/TURANDOT at the Bayerische Staatoper in Munich (World’s debut of Anna Netrebko as Turandot).

He was awarded by the Verbier Festival 2018 with the “Thierry Mermod Price” as the best student of the Opera Academy, in 2017 he got the “Alejandro Gutierrez medal” by the Caldas-Colombia government and also has been awarded with different prizes in Latin-American music in Colombia.

He has been a REQUIEM in L.V Beethoven 9th SYMPHONY with the Young Symphonic Orchestra of Colombia, Mozart Requiem with Bogota Philharmonic Orchestra conducted by Patrick Fournillier, VESPERAE SOLENNES DE CONFESSORE with Paris Chamber Orchestra conducted by Arianne Matiakh, Dvorak’s STABAT MATER with L’atelier des songes in Paris, Bach MASS in b Minor at the Philarmonie de Paris and the Shanghai Symphony Hall conducted by David Stern, in 2015 was chosen as a soloist for the Binational concert Colombia-Venezuela in L.V Beethoven’s CHORAL FANTASY with the Teatro Mayor Julio Mario Santodomingo in Bogotá conducted by Gustavo Dudamel and was the tenor soloist at the Closing Concert of the BachFest in Leipzig performing Bach’s b minor mass at the Thomaskirche in 2019.

In September 2020 he will do his debut as Wilhelm Meister in the Bayerische Staatoper Premiere of MIGNON at the Cuvillies Theater in Munich.