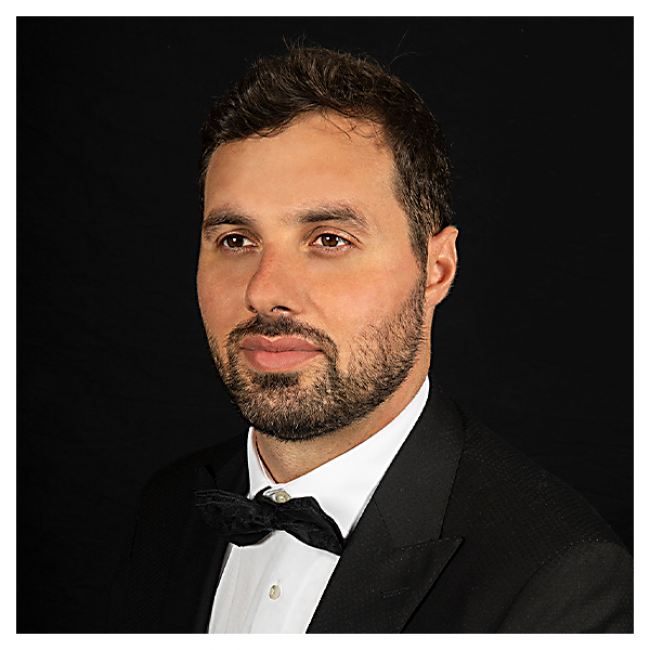 Paolo Ingrasciotta was born in Sicily where his interest for music began at a very early age. He started his studies with soprano Giuseppina Roberta Briena in Imola. He then went on to visit the Conservatorio di Musica di Venezia and joined the Accademia del Teatro alla Scala from 2016 to 2018.

At the Rossini Opera Festival in Pesaro he gave his debut as Tombonok/IL VIAGGIO A REIMS after participating at the Accademia Rossiniana. Further debuts include Schaunard/LA BOHEME in Treviso, Germano/LA SCALA DI SETA at the Teatro Malibran in Venice, Gaudenzio/IL SIGNOR BRUSCHINO at the Teatro Olimpico di Vicenza as well as Guglielmo/COSI FAN TUTTE in Genova, as Demetrius/MIDSUMMER NIGHT’S DREAM in Como, Brescia and Cremona and as Max/BETLY at the Teatro Donizetti in Bergamo.

During the last season he also made his debuts as Ford/FALSTAFF at the Teatro Sociale in Como in a new production of AsLiCo with further performances in Brescia, Cremona, Bergamo, Pavia and Fano. At the Festival del Luglio Musicale Trapanese in Trapani he sang Morales/CARMEN and Jupiter/ORPHEE AUX ENFERS and with the Orchestra Filarmonica Arturo Toscanini he w Figaro/BARBIERE DI SIVIGLIA at the Auditorium della Rai in Torino.

As a member of the Accademia del Teatro alla Scala he participated in many different productions including the title role in ALIBABÀ by Luidi Cherubini, Figaro/IL BARBIERE DI SIVIGLIA, Peter/HÄNSEL UND GRETEL as well as Don Magnifico/LA CENERENTOLA.

Recently he sang Ping/TURANDOT with the Fondazione Rete Lirica delle Marche and made his debut as Enrico/LUCIA DI LAMMERMOOR at the National Theatre Zagreb in a production by Pier Luigi Pizzi. Furthermore, he sang DON GIOVANNI in concert at the Macerata Festival, Marcello/LA BOHEME in Tirana and Schaunard/LA BOHEME in Bologna and Como.

Future engagements include Figaro/IL BARBIERE DI SIVIGLIA at Teatro Donizetti in Bergamo and Schaunard/LA BOHEME in Hyogo Japan under the baton of Yutaka Sado.