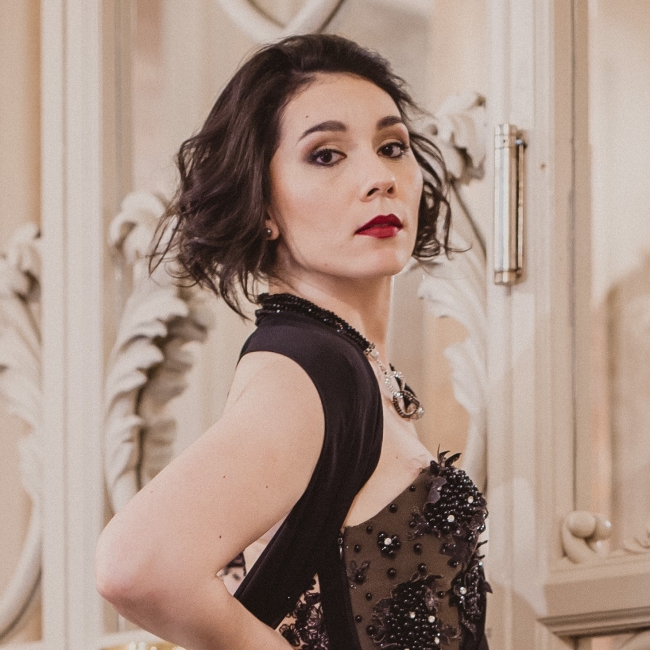 The young and promising mezzo soprano Ana Victoria Pitts was born and raised in Brazil where she began her musical studies at the Conservatorio Carlos Gomes in 2008.

In 2011 she was invited to further her studies in Italy and she received a scholarship allowing her to do so.  In the same year she won the ‘Young Promise Award’ at the International Sacred Music Competition in Rome.

In 2014 she graduated from the Conservatory of Rovigo and at the young age of 19 she made her debut in Belém in the role of Dido in Dido and Aeneas by Purcell.  In the same year she made her European debut in The Water Babies by Paolo Furlani at the Teatro Sociale di Rovigo.

From 2015-2017 she participated in the Young Artist Program at the Academy of the Maggio Musicale where she performed Der Kaiser Von Atlantis by Viktor Ullmann, Hänsel und Gretel by Engelbert Humperdinck, La Traviata by G. Verdi, La Cenerentola by Rossini and Mozart’s Requiem.  She also participated in international tours of Oman and Tunisia.

At the Rossini Festival of Wildbad she performed in L’Italiana in Algeri, Le Cinesi by Manuel Garcia, Il Vespro Siciliano by Peter J von Lindpaintner and Aureliano in Palmira  by Rossini.  She also performed in Otello by G. Verdi in Belém, Il Signor Bruschino at the Olympic Theatre of Vicenza, in Legnano, Chieti, Belluno, Jesi, Verona and Florence in La Scuola de’ gelosi by A. Salieri, Il Cacciatore Deluso by N. Jommelli in Tübingen and in a performance in honor of Luciano Pavarotti in Muscat.

In 2018 she debuted at the Opera of Lyon in La Bella Dormente nel Bosco by O. Respighi.  She was accepted into the Academy of Belcanto Rodolfo Celletti in Martina Franca where she participated in the Festival Della Valle D’Itria performing the Cantata, Giovanna D’arco and the role of a Christian Magician in Rinaldo by G.F Handel under the baton of Fabio Luisi.  In 2018 she also took part in the annual Masterclass in Vocal Technique held by the world famous soprano Raina Kabaivanska at the Institute of Superior Musical studies of Modena.

In 2019 she debuted at Sofia Opera & Ballet as Azucena in the Trovatore by G. Verdi, the role of Fidalma in the Matrimonio Segreto by Cimarosa at the Festival della Valle D’Itria with stage direction by Pierluigi Pizzi and as Amneris in Aida by G. Verdi at the Ravenna Festival.  In December 2019 she graduated from her Post Graduate studies at the Conservatory of Florence with top marks and honors with the Professor Donatella Debolini.

In 2020 she debuted as Korableva and Vera in the Risurrezione by Alfano at the Maggio Musicale Fiorentino.

Her recital repertoire includes, Il Bestiario by Castelnuovo Tedesco, Frauenliebe und Leben by Schumann and the Wesendonck Lieder by Wagner which she performed with the pianist Stefano Fiuzzi at the Bartolomeo Cristofori Academy of Florence.  In 2020 she also performed a recital in Oviedo for the Austurian Lyric Association Alfredo Kraus.

Her upcoming debuts for the summer of 2020 include the Borghese Gentiluomo and Arianna a Nasso by R. Strauss at the Festival della Valle D’Itria with Fabio Luisi as conductor.