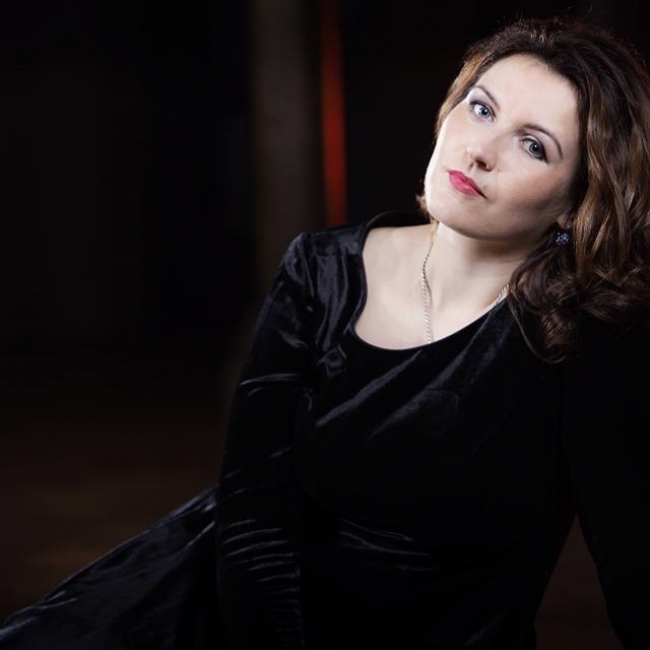 Latvian born soprano Liene Kinča started her education with Margarita Gruzdeva before she graduated from the Latvian Academy of Music (in the class of Sergejs Martinovs) in 2006. She then went on to work on her professional skills with Irena Milkevičiute in Vilnius, Ingrid Kaiserfeld and David Jones among others. Currently she is studying with renowned Vocal Coach Kirsten Schötteldreier. In 2011 and 2013 she won the prestigious Annual Latvijas Gāze Award as Best Female Soloist.

Liene Kinča made her solo debut in 2005 as Karolka in Janaček's JENUFA at the LNO. Her repertoire includes roles like Amelia in Verdi’s UN BALLO IN MASCHERA (2009), Dvorak’s Foreign Princess in RUSALKA, the title role in Puccini’s SUOR ANGELICA as well as Giorgetta in IL TABARRO, the title roles of Verdi’s AIDA and Puccini’s TOSCA and also Liza in Tchaikovsky’s PIQUE DAME. With roles like Sieglinde from Wagner’s DIE WALKÜRE, Gutrune, Third Norn and Woglinde from GÖTTERDÄMMERUNG she also conquered the German repertoire.

With the LNO Company she toured to Moscow and Hong Kong and sang the role of Aksinya in Shostakovich’s LADY MACBETH OF MTSENK.

In 2013 her engagements included Shostakovich’s song cycle FROM JEWISH POETRY in Antwerp, the title role of AIDA and the soprano part in Verdi’s MESSA DA REQUIEM at the 27. Macao International Music Festival together with the LNO Company as well as another AIDA production at the Slovak National Theatre in Bratislava. Furthermore she sang Liza in a new production of Tchaikovsky’s PIQUE DAME and Elena in another new production of Verdi’s I VESPRI SICILIANI at the Theater Freiburg.

The season 2014/15 featured her great success as Chrysothemis in a new production of Strauss’s ELEKTRA at the Opera Vlaanderen Antwerp as well as her highly acclaimed role debut as Leonora in Verdi’s IL TROVATORE at the Theater Freiburg. Since then she also made her debuts as Elisabeth in TANNHÄUSER and Senta in THE FLYING DUTCHMAN in Antwerp. At the Staatstheater Braunschweig she gave a successful house debut as Liza (PIQUE DAME) and in January 2017 she made her debut at the prestigious Teatro La Fenice as Elisabeth in Wagner’s TANNHÄUSER, a role that she then also sang in Bern. At the Passionstheater Oberammergau she enchanted the audience as Senta in THE FLYING DUTCHMAN. As Sieglinde and Gutrune she made her Vienna debut in the innovative new RING production of the Theater an der Wien. In spring 2018 she returned to Riga for performances of TANNHÄUSER which she also sang in Tokyo in early 2019. As Elsa/LOHENGRIN she also returned to the Vlaamse Opera. She sang a new production of TOSCA in Hanover and returned to Riga as TOSCA, Elisabeth/TANNHÄUSER and for the first time as Abigaille/NABUCCO. Furthermore she gave her debut in Genève in a Calixto Bieto production of Prokofiev’s WAR AND PEACE.

Future and current engagements include Ada/DIE FEEN and Elisabeth/TANNHÄUSER at Oper Leipzig, her role debut as Isolde/TRISTAN UND ISOLDE in Estonia as well as a return to Genève.